I absolutely LOVE tacos! But who doesn’t love tacos, right? I also have an addiction to pico de gallo. Pico de gallo on a steak taco, what is better than that? Uh, nothing. So when I came up with this sous vide flank steak tacos recipe, you could imagine my excitement! I used my sous vide and finished on my grill for a slight smoky flavor. You can also use a blackstone griddle to sear the meat. I have done this recipe both on the grill and blackstone. Both ways are absolutely delicious. Don’t own a sous vide? No problem, you can cook the flank steak on the stove or grill. If you don’t know what a sous vide is, it is a device that creates a different method of cooking by vacuum sealing your protein into a bag and placing it in a temperature controlled water bath.

This method of cooking is great for cheap cuts of meat. You can turn a cheap roast into something as amazing as a prime rib roast. Or you could use a cut as extravagant as a beef tenderloin and get the prefect cook, then just reverse sear it to get that nice caramelized crust! Sous vide is one of my favorite ways of cooking and I believe everyone should own one.

The Blackstone is another favorite of mine. Its the holy grail of griddles. I have not had my Blackstone long, but I have yet to make a meal on it that did not turn out well. Again, you do not need a sous vide or a Blackstone to make this recipe.

Start by chopping up, and adding the ingredients for the pico de gallo into a bowl and set aside. Using plastic wrap, cover the meat. Use a meat tenderizer to pound the meat down on both sides. This help tenderize the meat.

Pre heat sous vide water bath to 130 degrees. Rub meat down with 1 tbsp oil, garlic, cumin, cayenne pepper, salt, pepper and chili powder. Place into a Ziploc bag or vacuum sealed bag. Add lime slices and cilantro to the bag before sealing. Seal the bag and place into the water bath. Cook for 3 hours. Remove meat from the bag. Using either a hot cast iron skillet, grill or a Blackstone griddle, heat the pan, grill or griddle on high heat. Add 1 tbsp oil and sear meat (unless using a grill) 1 minute per side or until a crust has formed. Slice meat as thin as possible.

Flank steak on the stove method

Just like the sous vide method, rub the flank steak down with oil, garlic, cumin, cayenne pepper, salt, pepper and chili powder. Pre heat a cast iron skillet or a non stick pan over medium high heat. Add 1 tbsp of oil to the pan. Make sure you let that pan get piping hot! Add meat to the pan. For a medium rare steak, cook for 5 to 6 minutes per side. Add in lime juice to taste, or lime slices on top of the steak, 1 tbsp of butter and cilantro to the pan two minutes before pulling the meat. Baste the meat with the butter and cilantro the last 2 minutes of cooking. Use a meat thermometer, check meat and pull at 130 degrees. Let rest 10 minutes before slicing. Flank steak on the stove or with the sous vide, both ways are delicious!

Flank steak on the Blackstone

For cooking the flank steak on the Blackstone, simply follow the same steps as on the stove. Although, it will be hard to baste on a black stone, simply place butter on top of the steak right before done, along with the cilantro and lime juice or lime slices. Flip the steak and put butter on the other side as well.

Julienne the peppers and place into a bowl. Add 1 tbsp of oil, 1/2 tsp salt and 1/2 tsp pepper and mix until well combine. Using a cast iron skillet, non stick pan or a Blackstone griddle, heat on medium high heat. Add peppers and cook for 5 minutes if you like your peppers still firm. If you want softer pepper, cook for 10 minutes. Stir often.

I love when the tortillas are nice and warm and slightly toasted. I used my oven. Heat oven to 350 degrees, place shredded cheese on the tortillas and heat for 6 minutes or until cheese melted. You can also use a Blackstone to heat them up. If you are using the Blackstone, heat for about 50 to 60 seconds per side, then add the cheese to melt. Make sure you do not burn them. You can also do this in a cast iron skillet or non stick skillet.

Start by warming the tortillas and cheese in either the oven or the blackstone. Assemble your tacos with meat first, then the peppers and of course the best part, the pico on top, with fresh cilantro, salsa verda and fresh lime juice. Enjoy! Want more Mexican flavors? Click here to check out more recipes!

If you use the sous vide method, you do not need to let the meat rest.

Slice the meat against the grain, this will help the meat stay tender.

Can I use a different cut of steak?

Yes! A skirt steak or a flat iron steak will work perfect here. 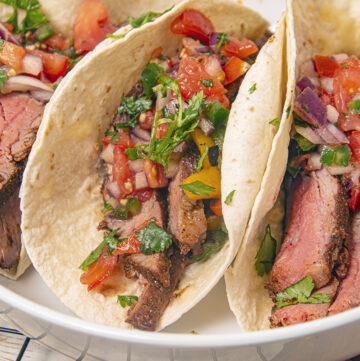 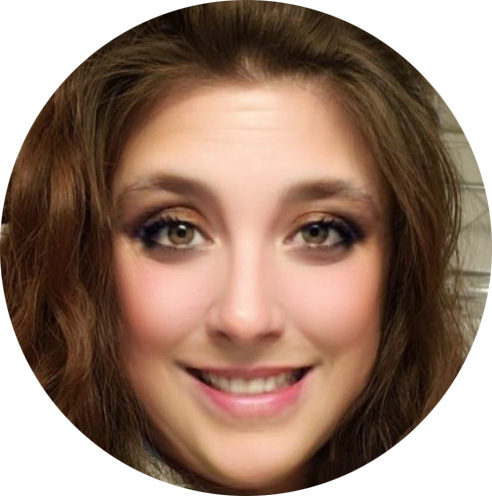