I love Korean rice dishes, but have you ever had a Korean BBQ rice dish? How about a BBQ Korean beef bibimbap? You don’t know what you’re missing! So what is bibimbap? Bibimbap is a Korean rice dish made up of vegetables, meat and obviously rice. It’s normally topped with a sauce and a fried or raw egg.

In my version of a Korean beef bibimbap, I made a chili BBQ sauce to go over the top. I also made a yellow rice, not white rice, which is what you typically find in a bibimbap. I made three sauces for this dish. The marinade for the beef, the coleslaw dressing and the chili BBQ sauce. I used a lot of the same ingredients in each sauce. However, each sauce has its own unique flavor. Typically, bibimbap has many vegetables in it. In my version, I did coleslaw only. It truly works in this dish.

This dish was inspired by a restaurant in Dearborn, MI. It was so delicious that I had to go home and not necessarily recreate it, but create my own version of it. So let’s get to making that BBQ Korean beef bibimbap rice bowl!

Lets start with the beef. What type of beef should I use for bibimbap? I personally used precut sirloin steak. You can buy whole sirloin and cut it yourself or buy a completely different cut of meat. A flat iron steak would work here. Make sure you tenderizer it if you are using a whole steak before cutting it. If you are using the precut sirloin for stir fry, cut the strips into 3 pieces.

In a bowl, add in gochujang, sesame oil, oyster sauce, and soy sauce, mix well. Add in the beef and stir until the beef is completely covered in the sauce. Marinade the beef for 2 to 24 hours.

Fire up your grill using propane, charcoal or my favorite, lump charcoal. Because these are smaller pieces of meat, you are going to need a grill basket. Place the meat in the grill basket and place on the grill. Cook for about 7 to 10 minutes tossing often. Remove from heat, wrap with foil and set aside.

Chili BBQ sauce for the bibimbap

This is a super simple step, add all the chili BBQ sauce ingredients into a small bowl and mix well. Pour the sauce into a squeeze bottle and set aside.

Lets make the coleslaw for this delicious Korean beef bibimbap bowl! Using a super sharp knife, cut cabbage into quarters. Cut the stem out. Repeat this step with the red cabbage. Thinly slice both the green cabbage and red cabbage as thin as possible. You need 4 cups for green cabbage and 1 cup of red cabbage. You do not need to shred all of the cabbage, you can use what’s left to make my cabbage soup recipe. Although this recipe calls for savory cabbage, green cabbage will work as well! Add the green and red cabbage to a bowl. Using a potato peeler, peal the carrot until the dirty parts are gone. Use a cheese grater or mandoline to grate the carrot. Add to the bowl with the cabbage and toss until well combine.

Rinse the basmati rice until water runs clear. In a large bowl or 4 cup measuring bowl, add water, better than chicken bouillon paste, ginger, salt, white pepper, ginger and turmeric. Mix until the better than chicken bouillon paste has disolved. Heat a large skillet on high heat. Add in rice and broth mixture, stir well and cover. Bring to a boil. Immediately turn heat to low once it hits a boil. Leave the lid on, do not touch it! Let simmer for at least 15 minutes before removing the lid. Test rice with a fork by just barley lifting the lid and pulling a fork full out. If it’s still to hard, leave for an additional 5 minutes.

Heat a large non stick skillet over medium low heat. Spray just a touch of pam cooking spray in the skillet. Add the eggs and cover. Cook eggs until the whites are cooked through and the egg whites on top of the yoke just barley turn white. This should only take a few minutes. Do not turn the heat up! You now have the perfect sunny side up egg! Next, toast the black sesame seeds for a few minutes and set aside. Finally, thinly slice the green onions. Now let’s build this Korean beef bibimbap rice bowl!

By now, I’m sure you’re mouth is watering and you can’t wait to taste what you just made, don’t worry, it was all worth the wait and time it takes to make this.

Start with the rice first and use about a cup (or more) of rice per bowl. 2 cups of raw rice normally should make 4 cups of cooked rice. But I often find, this is inaccurate. So you may have some spare that you can add to each bowl. After the rice, spread out that coleslaw, one cup per bowl. Then of course the meat, be sure to distribute it evenly. Finally, for the toppings, squirt the BBQ sauce over the top, then add the egg and lastly, sprinkle the green onion and toasted sesame all over the top. I hope you enjoy this recipe as much as I did!

Start cooking the beef 5 minutes after putting the rice on to ensure the beef will be nice and warm. 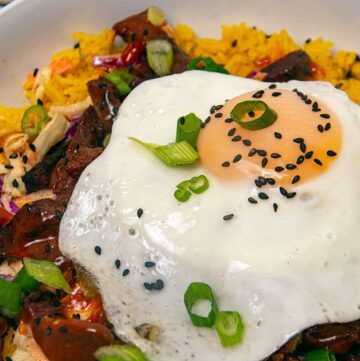