Let’s make this simple, easy Birria taco recipe. But first, let’s talk about what Birria is. Birria is a Mexican dish from Jalisco. It is traditionally a soup or stew made from a combination of chili pepper, meat, adobo, garlic, cumin, bay leaves, and thyme. It is cooked at a low heat for a long time. I am unaware of when it was transformed into a taco, but it is a good taco indeed. Although this is not authentic, it is still a great recipe. Dip and dunk these awesome little tacos into the consome sauce! It is the best way to eat them. Life does not get much better then a Birria taco! So let’s get to cooking!

What you need for the birria

Now, get the dry peppers together. Tip: Roll the dry peppers between your hands to loosen up the seeds. Cut the tops off and pour the seeds out. I bet your mouth is drooling right now because you can’t wait to dip and dunk those yummy tacos in that consome sauce! So lets get to it already!

To cook the meat faster, cut the chuck roast into 8 pieces. Salt and pepper each side of the roast pieces to your taste. Heat divided oil in a large soup pot or Dutch oven over medium high heat. Sear each piece of meat until a crust has formed, just a few minutes on each side. It is very important that you do NOT skip this step! Searing the meat off will lock all the juices in keeping it moist. Unless you prefer dry meat. Not to mention, it adds tons of yummy flavor! Once all the meat is seared, set aside. In the same pot add in the water and better then beef bouillon. In addition, add in the dry spices, tomatoes, tomato paste, green chili’s, dried peppers, one half of the onion, cilantro and lime juice. Bring to a boil and cover for 30 minutes.

Using an immersion blender or a counter top blender, blend the mixture until completely smooth. No need to remove anything from the pot, just blend everything! Once mixture is blended, add the meat back into the pot. Cover and cook on low for 3 hours or until meat is fork tender. Remove meat from the pot and shred the beef with two forks. Add 1/2 cup of the sauce to the shredded beef and stir until well combined.

Time to build the birria tacos!

Dunk each tortilla into the sauce. Spoon 1/4 cup of beef and 2 tbsp of cheese into each corn tortilla. (Onions optional) Sprinkle a tiny bit of onion in each taco and fold in half. In a large non stick pan, heat oil over medium high heat, fry both sides of each taco for 1 to 2 minutes or until the cheese is nice and gooey and the tortilla is brown and slightly crispy. Top with fresh cilantro and onions if desired and serve! Furthermore, if you want to up this recipe a notch, fry them on a blackstone griddle! Want more Mexican inspired recipes? Click here!

Can I use a different cheese?

Absolutely! You can use any cheese you want. You can even use no cheese at all! In fact, I don’t believe cheese traditionally goes into a birria taco.

Can I use any roast cut I want?

You sure can, as long as you cook it long enough to where it shreads easy, any cut will do. 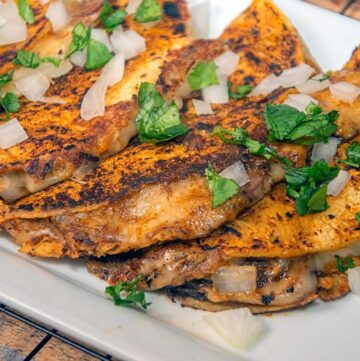